You can check out my books on Goodreads, as I periodically update my lifetime list of reads (in between actually reading books).

But, do you want someone (or a committee of somebodies) with actual literary authority to suggest some worthy books? Consider the bona fide award winners below.

Read the winners of these awards and you’ll never be lost for an answer to “What’s good?” 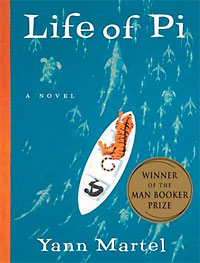 The Man Booker Prize for Fiction is awarded to a full-length novel, written originally in English, by a citizen of the Commonwealth of Nations (aka Brits) or the Republic of Ireland (not Brits).

Past Booker winners include one of my favorite books ever, Life of Pi by Yann Martel. (Seriously, please don’t tell me that you did not like Life of Pi or “get it.”)

The God of Small Things by Arundhati Roy and The English Patient by Michael Ondaatje also have won the Booker Prize.

Additionally, the Man Booker International Prize recognizes a writer of any nationality for his or her achievement in fiction. Winners include the continually great Canadian short-story writer Alice Munro (how does she keep doing it?) and American novelist Philip Roth.

Past National Book Award winners include another favorite of mine, Cold Mountain by Charles Frazier.

The Corrections by Jonathan Franzen and The Shipping News by E. Annie Proulx also have won National Book Awards. 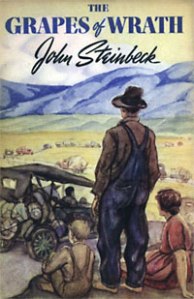 Steinbeck’s The Grapes of Wrath

The Nobel Prize in Literature goes to an author with “the most outstanding work in an ideal direction.” Generally, that means honoring an author’s body of work.

However, what Alfred Nobel meant exactly in his will by “idealisk” (which translates from Swedish to either “idealistic” or “ideal”) stirs up some controversy.

Past Nobel Prize honorees include such literary heavyweights as John Steinbeck, Samuel Beckett, and Saul Bellow. You won’t find Henry James, James Joyce, or Leo Tolstoy on the list though.

The Pulitzer Prizes honor U.S. excellence in journalism and the arts, including annual awards in fiction, nonfiction, biography, history, poetry, and drama.

Fiction winners include a diversity of great reads like Tinkers by Paul Harding, Olive Kitteridge by Elizabeth Strout, The Road by Cormac McCarthy (amazing!), The Amazing Adventures of Kavalier & Clay by Michael Chabon, Gilead by Marilynne Robinson, and  Angle of Repose by Wallace Stegner (all good, I promise).